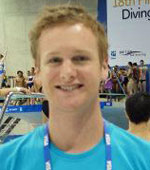 Simon Latimer, a former elite diver from New Zealand who wrote about his coming out for Outsports five year ago, will be a judge in the diving competition during the London Summer Olympics. He told GayNZ:

“I like it because it’s instantaneous. And it’s an opportunity for you to give your opinion. In some other sports you have to come to a uniform decision between all the judges, but in diving everybody has their own score that they put up. It’s all your own business and your own thoughts.”

Latimer, 30, whose elite diving career was cut short by an injury, says being a judge allows him to stay close to the sport without the time commitment of being a coach. He also said there is a nice perk of being so close to the action, joking that diving, "particularly with the guys, can be quite easy on the eye."

In his story for Outsports, Latimer wrote about regretting not coming out as gay while active, but he came out of retirement to dive at the 2006 Outgames (winning three gold medals) to honor a late friend.