Chris, a straight ex-Marine who plays in our gay-oriented L.A. Flag Football league, was pumped after his Blue Crew team won a thriller in league play on Saturday. So wearing his jersey, he headed to the nearby Oaks Gourmet for a burrito and wound up chatting with Steven Tyler of Aerosmith and "American Idol" fame, there for a pizza.

Chris and Steve talked about New England, motorcycles and the Marines. Tyler was with his biker friends but took time out to pose with Chris, still wearing his league jersey.

One of the perks of living in a place like L.A. are these random kind of meetings, and one way to get some pub for a gay flag football league. 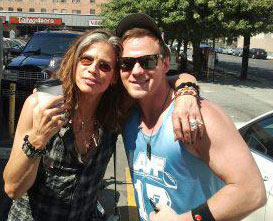