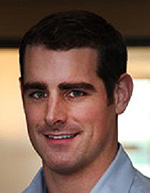 We're thrilled to see two athletes that Outsports introduced to the world, Brian Sims (right) and Galen Dodd, named to the Advocate's Forty Under 40 list. In Sims case, I guess we "re-introduced" him, as he was a captain of a successful college football team several years before he came out publicly on Outsports. Sims is actually running for a Democratic nomination in Philadelphia, and the election is today!

Last autumn, Dodd wrote a first-person account of coming out on his high school and club volleyball teams. His father followed that up with a moving piece about the importance of his son's coming out. Congratulations to both men on the recognition!