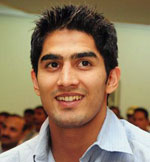 Here is a nice, refreshing story from India, where 2008 Olympic bronze medal boxer Vijender Singh says he enjoys being a gay icon. "It's nice to be desired," said the 26-year-old, who will compete in the London Olympics.

But how does the angel react to rumors of his link-ups with both men and women and also his ‘gay icon’ status? “It’s a part and parcel of fame and I am totally cool with it. She's also very open minded and has never had an issue with my friendships or any sort of link-up rumors.” Does he enjoy being a gay icon though?

“Why not,” he laughs and continues, “It’s nice to be desired and I also admire good looks in both men and women. So, there is nothing wrong in being wanted or idolized or fantasized about. I don't see why there should be a negative connotation to someone liking you or desiring you.”

I love how he does not deny the rumors he hooked up with men, any of which occurred when he was single, and is rather blase about the whole thing. He's another athlete to root for as the Olympics draw near.