Share All sharing options for: Nebraska coach Ron Brown would be "honored" if he was fired for his opposition to gays 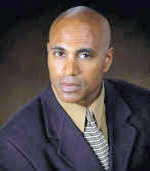 Nebraska assistant football coach Ron Brown said he'll keep speaking out against gays, even if it costs him his job, but his bosses support him.

Brown said in an interview with The Associated Press that "to be fired for my faith would be a greater honor than to be fired because we didn't win enough games. I haven’t lost any sleep over it. I realize at some point, we live in a politically correct enough culture where that very well could happen.”

Coach Bo Pelini and athletic director Tom Osborne say Brown is a good coach and he is within his rights to express his personal views.

I could not find a longer version of his AP interview, but he is doubling down on his views rather than backing down, clearly seeing himself as some sort of martyr and framing this as a religious freedom issue. Cyd wrote a powerful column advocating why Brown should be fired for his strident and public opposition to gays; Athlete Ally also started a Change.org petition asking for his removal. But it appears as if there is no chance of that happening with his coach and athletic director firmly in his corner.