Coby Fleener gets more good Luck with the Indianapolis Colts...as he requested on Grindr

Share All sharing options for: Coby Fleener gets more good Luck with the Indianapolis Colts...as he requested on Grindr 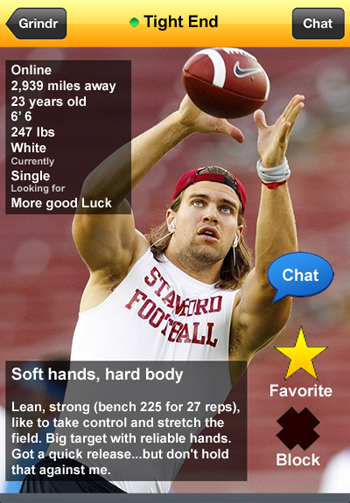 Stanford tight end Coby Fleener is reunited with Andrew Luck as the Indianapolis Colts selected the two former teammates with their first two picks in the NFL Draft. Our Grindr preview of the NFL Draft had Fleener looking for "More Good Luck," and that's exactly what he got. With Dallas Clark and Jacob Tamme gone from Indy, Fleener was a great pick-up.

Check out our NFL Draft on Grindr to see if the other featured draftees got the relationship they wanted.