Share All sharing options for: ESPN airs English soccer game, riling up the "soccer is gay" idiots on Twitter 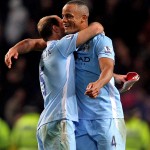 For the first time, an English Premier soccer game was shown on ESPN's main channel. It was a huge match, with first place on the line between Manchester and Manchester City (City won, 1-0). The game started at 2:30 p.m. EDT on a Monday, meaning there was nothing else going on in sports and ESPN simply would have shown the same SportsCenter weekend highlights for the thousandth time.

But seeing such a "gay game" on a channel reserved for more manly sports like American football and car racing upset a fair number of people with Twitter accounts, who let their homophobia and jingoism fly. Deadspin has an entire rundown of assorted negative comments, but here are the anti-gay ones:

These tweets bring back memories of a piece we wrote in 2008 -- "Americans hate soccer because it's gay" -- that still gets comments four years later. I am not sure how soccer is supposed to be "gay" unless some people think all non-Americans are gay.

After posting this on the Outsports Twitter feed, this came in: