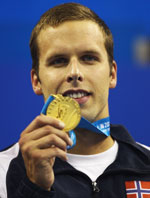 The swimming world is stunned by the death today of Norwegian swimmer Alexander Dale Oen, 26, who died suddenly from cardiac arrest in his room at a pre-Olympic training camp in Flagstaff, Ariz. Oen was the world champion in the 100-meter breaststroke and a favorite to medal at this summer's Olympics.

One of the last interviews Dale Oen did was with Jeff Commings, SwimmingWorld.TV associate producer. Commings, who is openly gay and planning to compete at the U.S. Olympic Trials, called Dale Oen "one of the nicest people I've ever encountered in this sport."

It still hurts to the very depths of me that the world will no longer see [his] smile. When I sat down to interview him ... I wasn't just talking to a fellow breaststroker. I was talking to someone who was excited about the promise of a future that reached well beyond the London Olympics. He talked about swimming at the Rio Games. He was half-serious about still competing in the Olympics in 2024, when he would have been 38. ...

He had immense respect for his rivals, and a genuine love for the sport. Now that he's gone, many of his words -- spoken in near-perfect English -- will resonate with me forever. I even remember how he had joked that he wanted to sign off his interview with a riff on the classic line from the movie Anchorman: "You stay classy, Swimming World."

There is something haunting about an elite athlete, in prime physical condition, dying young. "As an athlete, I can attest that we all feel invincible. Alex's death will forever soften that mindset for me. None of us is Superman," Commings wrote.

Here is a photo that shows Dale Oen at the height of his sport, after winning the 100-meter breaststroke final during FINA World Championships in Shanghai, China, last year. (Photo by Feng Li/Getty Images). 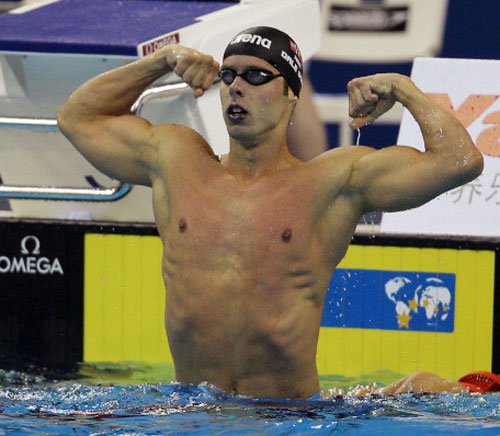