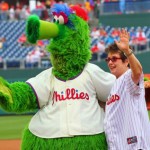 King was introduced to the crowd as "one of America's greatest sports icons and social justice pioneers." She didn't throw from the mound, but still showed nice form:

Your browser does not support iframes.