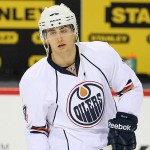 Brian Elliott of the St. Louis Blues and Jordan Eberle of the Edmonton Oilers are the latest in a series of National Hockey League players to endorse the You Can Play project to fight homophobia in sports.

"I support LGBT athletes everywhere," says Elliott in the video. The project, started by Philadelphia Flyers scout Patrick Burke to honor his late brother Brendan, has been on a roll since starting two months ago. It just teamed up with Major League Soccer in a partnership.

Eberle is a finalist for the Lady Byng Memorial Trophy, given to the NHL player who best exhibits sportsmanship. Elliott is the goalie for the Blues, the No. 2 seed in the Western Conference playoffs, who fell in the semifinals to the Los Angeles Kings.