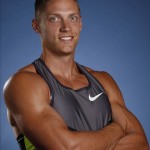 Top medal hopefuls from the U.S. Olympic team were on hand in Dallas this weekend for a media meet-and-greet. US PRESSWIRE sent photographers to get some terrific portraits of some of the athletes.