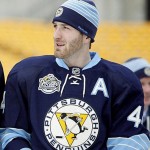 What I like most about the 30-second video done for the You Can Play project by Pittsburgh Penguins defenseman Brooks Orpik is that it's just him speaking into the camera. The result is a simple but powerful message about inclusion in the sport. Says Orpik in the video:

What matters to me and my teammates? A player with a hard slap shot. A player with awesome puck-handling skills. A player who can shoot. A guy who can help our team win ... You know what doesn't matter to me? If a player is straight or gay. Sports should be open to anyone who loves the game and will play hard ... My teammates are my friends and we're all playing to win. I'm Brooks Orpik. If you can play, you can play."

Orpik spoke to Ron Cook of the Pittsburgh Post-Gazette about the video and said he has heard nothing but positives since it was released this weekend. "If I do hear anything negative, it'll probably be from people who have a problem with themselves and don't like who they are," he said.

Orpik said he has never played with a teammate he knew was gay. "But I think we as players are being completely naïve and kidding ourselves if we don't think we've had a gay teammate. Look at the percentages of adult males who are gay. We've probably had a lot more than one gay teammate."

Orpik said he thinks most -- but not all -- players would accept a gay player in the room. "I would assume a player the guys knew and had a friendship with, that wouldn't change it. But a new guy coming in? I don't know. I'm not saying that's right or the way it should be. But in the current environment, I think it might be hard for that player. That's just my opinion."