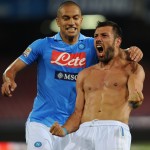 Photo 1: Andrea Dossena of Napoli celebrates after scoring his team's second goal during the Serie A match between SSC Napoli and AC Siena in Naples. (Photo by Giuseppe Bellini/Getty Images)

Photo 2: Scott Selwood of the Eagles looks to pass the ball during the round eight AFL match between the West Coast Eagles and St Kilda Saints in Perth, Australia. (Photo by Paul Kane/Getty Images)

Photo 10: Notre Dame Fighting Irish midfielder Max Pfeifer (45) celebrates his goal with teammate Sean Rogers (18) against the Virginia Cavaliers during the second half of the NCAA Division I Men's Lacrosse Quarterfinals. (Photo by Eric Hartline-US PRESSWIRE)

Photo 11: Minnesota Twins catcher Joe Mauer (7) puts on his facemask during a game against the Milwaukee Brewers at Miller Park. (Photo by Benny Sieu-US PRESSWIRE)