Serena Williams loses in French Open to player ranked No. 111

Share All sharing options for: Serena Williams loses in French Open to player ranked No. 111 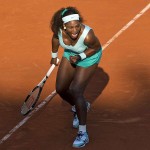 Outsports reader and tennis fanatic Mdterp01 had picked Williams to win the French Open just hours before her loss, then responded:

Nooooo Serena!! After I pumped you up to take this shit!!! I can't believe after leading 5-1 in the tiebreak and then almost coming back to get back on serve after going down 0-5 in the third? If only she had converted those many bp chances at 3-5 down. But, that's why they play the game. Surely one of the biggest upsets in tennis history. This totally f**ks my French Open for the women. I don't care who wins now as long as it's not Sharapova.

While the men are quite predictable these days (Djokovic, Federer or Nadal), the women are all over the place.

(Photo: Serena Williams reacts during her match against Virginie Razzano at the French Open at Roland Garros. Photo by: Susan Mullane-US PRESSWIRE)