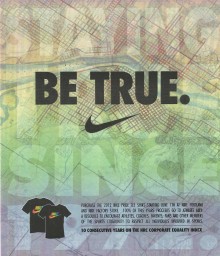 Homophobia and transphobia are persistent problems in sport that have silenced gay, lesbian, bisexual and transgender athletes and coaches for much of the last century. Thanks to pioneers like former NFL player Dave Kopay, tennis great Martina Navratilova, and transgender professional tennis player Renee Richards, the climate for LGBT athletes and coaches began to shift three decades ago…but only marginally.

In contrast, 2011 was a watershed year in the fight to end homophobia and transphobia in sports. We have finally reached a tipping point when anti-gay slurs, silence and discrimination are no longer the accepted norms in sports. Increasing numbers of LGBT athletes are coming out, and many more straight allies are speaking up to support them. Joining established athletics-focused groups like the NCLR sports project and Outsports.com, LGBT advocacy groups like GLSEN, It Gets Better and GLAAD are widening their focus to include sports. It seems as though more new organizations are also coming forward to fight discrimination in sports every few weeks. Each organization is doing great things. Some target high schools sports, others target college athletics or professional sports; Some focus on legal advocacy, others outreach or media.

These changes are exciting and reflect a shifting culture in sport. Once dominated by discrimination and silence, a new climate of support and openness for LGBT athletes is emerging. The increasing numbers of groups focused on making sports a great place for everyone who wants to play or coach are helping to speed up the pace of change. But our effectiveness in ending homophobia in sports has been limited because we are not working together effectively. Despite being led by athletes and coaches whose success is built on communication and teamwork, most of these advocacy groups aren’t talking to one another. We all share the same goal, but we haven’t been playing like a team.

On June 14 in Beaverton, Ore., that will change. Thirty leaders who are actively advocating for LGBT equality in sports will come together at Nike World Headquarters for the first-ever Nike LGBT Sports Summit. The goal of this ground-breaking event is to create a team game plan for ending homophobia and transphobia in sport that takes advantage of the best thinking and strengths of each organization. The aim is to increase our ability to collaborate on bringing about the change we all are committed to.

To maximize the effectiveness of our collaborative efforts, we envision this summit as the first of an annual event. Our intention is to include other organizations and individuals who share our goals as we extend our network over the coming year. The 2013 summit will be open to everyone who is committed to ending homophobia and transphobia in sports.

Thanks to Nike’s commitment to making sport a respectful and inclusive experience for LGBT athletes, we have an opportunity to make the next 12 months an even more amazing year of progress for LGBT athletes and coaches at all levels of sports. We’re also blessed to have the support of online sports leader SB Nation and worldwide tech leader Microsoft. The commitment of these companies, along with the organizations involved, opens an opportunity like never before to make equality in sports a reality for all.

We hope that pioneers of our movement will be proud to see the progress we are forging on the foundation of their courage and determination. Together, we will end homophobia and transphobia in sports. We hope you will join us in the coming year.