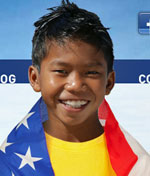 Here is an awesome story from the Indianapolis Star about 13-year-old diver Jordan Pisey Windle. He is an orphan from Cambodia who was adopted in 2000 by Jerry Windle. Years later, Windle met and fell in love with Andrés Rodriguez and now Jordan has two dads. He filmed an It Gets Better video (below) and will be the grand marshal June 9 for the Circle City IN Pride Parade, put on by the Central Indiana LGBT community.

Here is a great anecdote about how easily Jordan accepted Rodriguez into he and his dad's life:

"When I got involved with this family, Jordan made it so easy," Rodriguez said. "From day one, we hit it off. He made it such a smooth transition that I felt like a member of the family from day one."

In fact, it was Jordan who broached the topic of whether Rodriguez was a visitor or a permanent addition. The three went out to dinner one night, several months after Windle started dating Rodriguez, and at some point during the meal Jordan turned to him and said, "Are you going to join our family? Can I call you Papi?" Now, Rodriguez is the parent Jordan turns to for tips on talking to girls and other adolescent concerns. 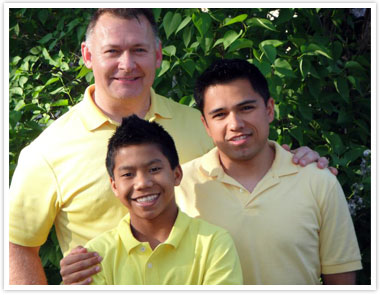 Jordan will compete at the Olympic diving trials June 16-17, trying to land a spot in the 10-meter synchronized diving with Toby Stanley. His more realistic goal is to make the 2016 team in Rio. His mentor and friend is Greg Louganis, who first met Jordan when he was 8. "For an 8-year-old, he asked very insightful questions," Louganis said.

What is so cool is how blase Jordan is about how "different" his family life is from the accepted norm. "I've never actually thought about it," he said.

The Indy Star story is well worth your time as is Jordan's very comprehensive blog.

Here is Jordan's It Gets Better video, where he says, "I think having two dads who love me is awesome.":