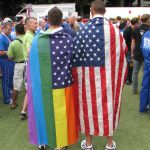 The groups that run the Gay Games and the Outgames failed in their attempt to hold one worldwide LGBT sporting event in 2018.

Board members from the Federation of Gay Games and the Gay and Lesbian International Sport Association met in Montreal over the weekend, but were unable to reconcile their differences. There was even a dispute over the issuing of a press release that announced the failure of the talks.

Outsports got the release Sunday, but that was sent by GLISA over the FGG's objections. We were told by sources that there was still a chance a deal could be done and that the release was premature. This is why we held off, but nothing new has occurred since and FGG President Kurt Dahl had no comment today on the negotiations.

This should have been a no-brainer -- a 2018 joint event called the Gay Games (it's the stronger brand, having been around since 1982 vs. 2006 for the Outgames), combining the strengths of both groups. It would make it easier to gain sponsorships and allow athletes to focus on one event. But egos and agendas got in the way and so, unless things change, there will be a 2017 Outgames and 2018 Gay Games.

Here is the release:

The Boards of the Gay and Lesbian International Sport Association (GLISA) and the Federation of Gay Games met in Montreal on May 5 and 6, 2012 in an effort to come to an agreement on the creation of one quadrennial event (1QE) for 2018. After over two years of discussions and negotiations, both organizations regret to announce that even ...though every attempt was made to do so, an agreement was not reached.

Both Boards, with the support of their memberships, had every intention to re-unite the international LGBTQIQ community around a new event based on three components: Sports, Culture and Human Rights. This 1QE would have combined the achievements and long standing history of both organizations and their events.

The Boards have decided that at this moment, both organizations are unable to reconcile their differences in time for the 2018 event cycle. For the final negotiations for the Agreement, the FGG was represented by Dennis Sneyers, Shamey Cramer, Klaus Heusslein and Kurt Dahl; GLISA international was represented by Julia Applegate, Nelson Lee, Daniel Vaudrin and Wessel van Kampen.

The Boards are disappointed, but hope remains that an agreement will be reached over the next few years to create a future joint event for the next cycle of 1QE and that the future discussions will be fruitful.

The boards of both organizations would like to thank the many members, partner organizations and individual participants that have continued to support the attempts to re-unite the international LGBTQIQ community around Sport, Culture and Human Rights.

Special thanks to the Fierté Montréal Pride for providing us with a meeting venue. Thanks also go to Jason Stone and Catherine Meade for their contributions to the negotiations.

It is the intent of both organizations to continue negotiations in the future to provide the global community with great events. See you in Antwerp in 2013 and Cleveland in 2014.