Pittsburgh Pirates release It Gets Better video, to work with gay youth to fight bullying

Share All sharing options for: Pittsburgh Pirates release It Gets Better video, to work with gay youth to fight bullying 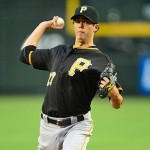 The Pittsburgh Pirates released an It Gets Better video last Friday before a home game at PNC Park that was designated youth night for the Pittsburgh Gay and Lesbian Community Center. The video was not just a one-off -- the team is committed to fight bullying. From local activist Sue Kerr, who started the petition to get the video made:

There’s so much more. The Pirates are teaming up with the GLCC and GLSEN Pittsburgh for an ongoing effort to educate about bullying. They [hosted] the ENTIRE youth program for this premiere night including families and siblings. I can’t even describe it now except to assure you that no other professional sports team has gone this far to reach out to LGBTQ youth. I am so proud to be from Pittsburgh.

This is way cool and shows a commitment beyond a video, which the Pirates addressed:

Pirates President Frank Coonelly said bullying can't be tolerated. "We feel it is important to get the message out that there is no place in our society for bullying anyone for any reason," he said. "The organization is pleased to utilize our resources to help call attention to this subject and to encourage those that have been a victim of bullying to come forward and seek help."

The video features Pirates Manager Clint Hurdle and pitchers Joel Hanrahan and Jeff Karstens and does mention LGBT teens specifically, which some videos do not.