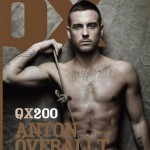 Original story: Swedish soccer player Anton Hysen, who came out as gay last year, has reached the finals of the Swedish TV show "Let's Dance" (their version of "Dancing With the Stars."). A British betting website has made Hysen (and partner Sigrid Bernson) the solid favorite to win this Friday's finale against actress Molly Nutley.

Hysen wrote on Twitter: "Last week of training;) im in a good mood for friday. Im going to put all my life into the very last night of dancing!"

Hysen is naked on the May cover of the Swedish gay magazine QX. His bare butt is shown in an inside photo spread and Hysen attributes his asset to playing 15 years of soccer.

"OK, not everyone is born with a bubblebutt. My brother has the same, our asses stand out as you might say."

Hysen turned serious when asked about how he has embraced being known as an openly gay athlete, saying it has given him a forum to discuss sports and homophobia.

"I got [a letter] from a guy who was thinking about ending his life, but thanks to me and the fact I came out of the closet he changed his direction in life- That is hard to take in. That is big."

Good luck to Hysen in the dancing finals. Here is the jive he did in the semis: