Share All sharing options for: Italian soccer player Antonio Cassano wants no "queers" on his team 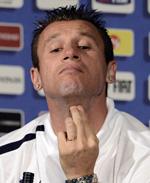 Here is another example of how backward so much of international soccer is: Italian forward Antonio Cassano, in Poland for Euro 2012, said he hopes there are no gays on the team and then he used a slur to describe gays. From the London Guardian:

When asked about media reports that there were two metrosexual players and two homosexual players in the Italy squad, the Milan forward said: "What's a metrosexual?" before adding: "Queers in the national team? That's their business. But I hope not."

Ironically, the Italian coach earlier this year wrote the preface to a book about gays in the sport that was very accepting:

"Everyone should be free to live with their desires and their feelings. We all need to dedicate ourselves for a sports culture that respects individuals in every expression of truth and liberty."

Italian gay activists decried Cassano's comments and one urged that he be kicked off the team.

Between the racism and homophobia, Euro 2012 is really turning out to be quite an event.

"I sincerely regret that my statements have sparked controversy and protest from gay rights groups," said the statement on the official website of the Italian Football Federation.

"Homophobia is a sentiment that is not mine. I did not want to offend anyone and I can not question the sexual freedom of other people. I only said that it is a problem that does not concern me and it is not for me to pass judgment on the choices of others, who are all respected.''