Ryan Kesler, Winnipeg Jets, University of Denver hockey in You Can Play videos

Share All sharing options for: Ryan Kesler, Winnipeg Jets, University of Denver hockey in You Can Play videos 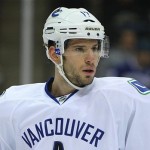 There are two new videos out for the You Can Play Project that show its widening appeal in the hockey world. One is from the nationally ranked University of Denver hockey team. The other is one from Tanner Glass and Dustin Byfuglien of the Winnipeg Jets and Ryan Kesler of the Vancouver Canucks.

Glass was influenced by the coming out of a fellow Dartmouth athlete, lacrosse player Andrew Goldstein. He told CANOE in Canada:

Glass has felt strongly about the issue since he was at Dartmouth College, where a fellow athlete, a lacrosse player, made headlines by coming out.

“That just brought it to the forefront in my experience,” Glass said. “No one should be afraid to come out and be themselves and be accepted in sports.”

Patrick Burke, who started the campaign, said he hopes to have two members of the new Stanley Cup champion Los Angeles Kings -- Dustin Brown and Alec Martinez -- get on board.

As for the University of Denver ad, one player says: "I'm still going to joke around, but it's not because you're gay. It's because you're part of our team."