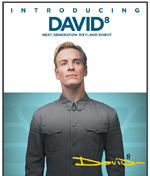 Greg Louganis is flattered that his diving style was an inspiration to actor Michael Fassbender as he played the android David in the film "Prometheus." The Irish actor, who has never met Louganis and was not even sure he was alive, said an image of the Olympic diver stuck in his head. He tells GQ:

"For some reason I got this visual image of Greg Louganis walking toward the end of a high diving block. ...This economy of movement. Total efficiency. If you're going to move your hand, it's for a reason. I thought it would suit the character of a robot—everything is totally relaxed, until you need to pick something up and move it over here."

Far from being offended for inspiring a non-human, Louganis tweeted about it and told GQ he was "stunned and flattered" by the portrayal. He described his physical motion as a diver this way:

"It's meditation in motion. You watch predatory animals, like a game cat, going after its prey, there's no excess energy expended. It's that kind of focus. There's no excess. Everything is going toward what your goal is."