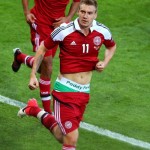 UEFA, the governing body for soccer in Europe, has decreed that wearing the wrong underwear is worse than racism. It fined Danish striker Nicklas Bendtner $126,000 and suspended him one game for wearing underwear that had a sponsor's name on it (Paddy Power, an online Irish bookmaker).

Bendtner pulled down his shorts to flash his Paddy Power underwear last week after scoring a goal against Portugal at Euro 2012 in the Ukraine. He violated an UEFA rule (of which he says he was unaware) of that says "all kit items worn during the final tournament must be free of any sponsor advertising."

The Guardian soccer blog put together a list that showed where racist incidents on and off the field get a much lesser penalty than Bendtner's underwear stunt.

In some of the cases Bendtner's "crime" has been judged by Uefa to be about 10 times as bad as racist chanting. How can anyone possibly justify that? Uefa needs to come out and say why it has decided to fine a player £80,000 for breaking a rule he said "he wasn't aware of" while punishing racist abuse less severely.

Denmark is out of Euro 2012, but Bendtner will be banned from a key World Cup qualifier against the Czech Republic in September. He says he will appeal the fine and suspension. 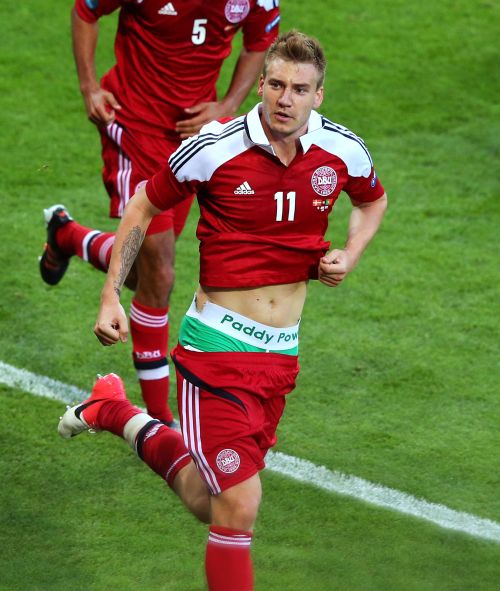 Nicklas Bendtner of Denmark celebrates scoring their second goal during the UEFA Euro 2012 group B match between Denmark and Portugal at Arena Lviv in Ukraine on June 13. (Photo by Alex Livesey/Getty Images)