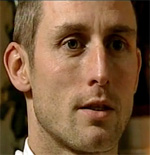 Marcus Urban, a former player in the second division of the German pro league who came as gay after retiring, will live tweet Tuesday's England vs. Ukraine match at Euro 2012. This is part of a campaign to call attention to pending legislation in Ukraine that could effectively ban all mentions of homosexuality.

"I had to quit my career 20 years ago, because of the pressure to conform in professional football. Even now, just a few days ago, an Italian forward playing at Euro 2012 said that he hopes there are no gay players in his team,” said Urban, “He is a typical example of how little football has advanced on this issue in the last two decades. As a matter of fact, there are no openly gay players at the Euro 2012 at all."

Urban is working with AllOut.org, a gay rights group. You can follow his tweets of the match starting at 2:30 p.m. EDT.

"The situation for lesbian and gay people here in Ukraine is urgent, and we need supporters like Marcus and All Out members all around the world to speak up with us", said Zoryan Kis, executive director of Fulcrum, a Ukrainian LGBT organization.

Leaders from six European nations have refused to attend games played in Ukraine, where a recent gay rights march was canceled after thugs beat up an organizer and threatened to disrupt the event.

Urban quit soccer at age 23, after he grew exhausted from hiding his sexual orientation for 10 years.