Gays in the NFL: Vince Lombardi would be fine with it

Share All sharing options for: Gays in the NFL: Vince Lombardi would be fine with it 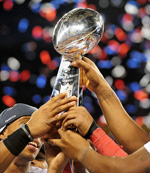 The Lombardi Trophy is given to the Super Bowl champs (Photo by Mark J. Rebilas/US PRESSWIRE)

Outsports has had a spate of stories dealing with gays in the NFL, including interviews with several current players who say they would be fine with an openly gay teammate. Nate Jackson, who played receiver for the Denver Broncos from 2003-2008 and is a talented writer, has weighed in with his thoughts on Buzzfeed.

He rehashes the arguments we've heard for years about why there are no openly gay players (the locker room, the media etc.) and concludes that the best fit would be a team in a small market with dedicated and loyal fans.

Ultimately, the gay player would have to be on a team in a city that wasn’t big on social issues. That didn’t care about memes and gossip. It would have to be in a city where football was everything. Where the fans were kind and supportive. And where the media presence was minimal. A team with a cohesive locker room, compassionate veteran leadership, tolerant ownership and a relatively young coaching staff.

And the winner is: The Green Bay Packers. It's the optimum destination for an openly gay player. I wonder what Vince Lombardi would think.

He ends with that, leaving the reader wondering how Lombardi, the legendary Packers coach from the 1960s, would react. I can answer that: Lombardi would be fine with it.

Lombardi had a gay brother, Harold, whom he loved and supported. In his biography of Lombardi ("When Pride Still Mattered''), author David Maraniss told how the coach privately rooted for the Packers he knew were gay to make the team each season to prove they belonged.

I asked Dave Kopay, who came out as gay after retiring in 1975, what he thought. Kopay played for Lombardi on the Washington Redskins in 1969. He wouldn't care, Kopay said, as long as you didn't jump offsides, miss a tackle or make a mental mistake. Kopay told me how people in the organization at the time knew that Redskins GM David Slattery and PR man Joe Blair were gay and knew of the sexual exploits of star tight end Jerry Smith (with whom Kopay once had an affair). Lombardi had to have known, Kopay said.

One Packer famously said that Lombardi "treats us all the same -- like dogs." To the coach, there were no gay dogs or straight dogs; there were just Packers who had one goal: to play their best and win.