The coolest soccer tradition -- players taking off their shirts

Share All sharing options for: The coolest soccer tradition -- players taking off their shirts 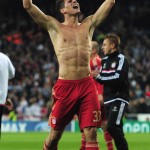 With Euro 2012 in full swing, we are seeing once again a soccer tradition -- players taking off their shirts after scoring a goal and winning the game. It occurs at all levels on all continents as the photos below show.

The simple nature of the soccer uniform makes ripping off one's shirt fairly easy. If NHL or NFL players tried the same, they'd be penalized for delay of game. And with goals at a premium in soccer, scoring one has more emotional impact than making a basket.

A gallery from matches in the past few weeks:

Photo 1: Zlatan Ibrahimovic of Sweden looks on at the final whistle during the UEFA EURO 2012 group D match between Sweden and England at The Olympic Stadium in Kiev, Ukraine. (Photo by Laurence Griffiths/Getty Images)

Photo 2: Tim Cahill of Australia acknowledges the fans after Australia drew with Japan during the FIFA World Cup Asian Qualifier match between the Australian Socceroos and Japan at Suncorp Stadium in Brisbane, Australia. (Photo by Chris Hyde/Getty Images)

Photo 3: Steven Gerrard of England shakes hands with James Milner after the International Friendly match between Norway and England at Ullevaal Stadion in Oslo, Norway. (Photo by Alex Livesey/Getty Images)

Photo 5: Ciro Immobile (L) and Marco Verratti (R) of Pescara Calcio celebrate after their promotion to Serie A after the Serie B match between UC Sampdoria and Pescara Calcio at Luigi Ferraris Stadium in Genoa, Italy. (Photo by Marco Luzzani/Getty Images)