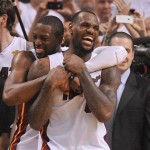 LeBron James won his first NBA title as the Miami Heat rolled the Oklahoma City Thunder, 121-106, to win the NBA Finals in five games. What made me happy was not James getting a title, but that two of the Thunder owners won't have one.

As I wrote before the Finals started, minority owners Aubrey McClendon and Tom Ward have given $1.5 million in recent years to fight gay marriage. Knowing that colored my rooting interest in the series, even though I like some of their players, such as Kevin Durant.
In defending his contributions, McClendon said, "In my opinion, that does not make me anti-gay at all. Instead, it makes me pro-the traditional concept of marriage, and I do not believe the biblical sacrament should be between anyone other than a man and a woman.”

That's nothing but BS. Dropping a million to fight gay marriage is the very definition of anti-gay since his money spoke louder than words. Here's hoping the Thunder never win a title as long as he and Ward are involved.