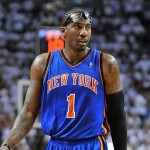 Amar'e Stoudemire of the New York Knicks was fined $50,000 by the NBA for calling a fan a "fag" on Twitter. Stoudemire had apologized for the slur and expressed his remorse after being fined:

“I am a huge supporter of civil rights for all people. I am disappointed in myself for my statement to a fan. I should have known better and there is no excuse.”

In announcing the fine, the NBA cited Stoudemire for using “using offensive and derogatory language,’’ according to Stu Jackson, NBA Executive Vice President of Basketball Operations.

Stoudemire got in trouble after he tweeted to a fan: 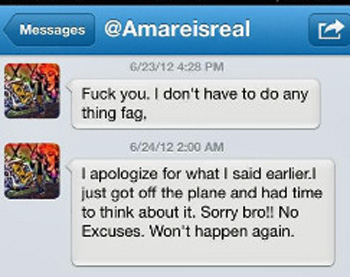 ESPN columnist L.Z. Granderson, himself openly gay, wrote a column about what the incident shows, concluding:

Apologizing for the slur shows leadership. Using the slur in the first place shows a mistake in judgment. Using it on Twitter, after everything that's happened on that medium over the years, shows he still doesn't get it.

Stoudemire makes $19.9 million, but a $50,000 fine is in line with what Kobe Bryant got for calling a referee a "faggot." It's one more sign that using homophobic language will cost an athlete in pro sports.