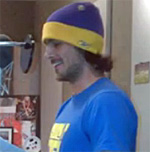 Kluwe doing the radio ad against the marriage amendment.

Chris Kluwe, 30, is a punter entering his eighth year with the Minnesota Vikings. He has done three radio ads for Minnesotans for Equality, opposed to a November ballot initiative in the state that would change the state constitution to define marriage only between a man and a woman.

Outspoken and articulate, Kluwe talked with me about why he is passionate about the issue, what it means to be a family and how a gay player would fit in the culture of the NFL.

Outsports: How did you get involved in the fight in Minnesota against the marriage amendment?

Kluwe: Someone contacted me on Twitter [from Minnesotans for Equality] and asked if I'd be interested. I said yes. I've always believed that people are inherently the same and should have the same rights and equal protection under the law. It really doesn't matter what you do with who or whom as long as you're not infringing on someone else's rights. Everyone should be free to live their own life however it makes them happy.

Outsports: You've cut three radio ads so far. How involved are you going to get in this?

Kluwe: We did three of them and hopefully they'll release the last two in a week or so. Whatever else they want me to do, I'm more than happy to speak up about it. 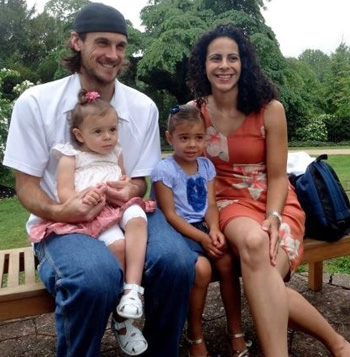 The Kluwes: Chris and Isabel with daughters Remy (left) and Olivia

Outsports: In the 30-second ad, you referenced families a lot. Families are the thing thrown at supporters of gay marriage because we're told we have to protect the traditional family. Was that a conscious decision on your part to mention family several times?

Kluwe: I had some input in writing it and I wanted to make sure it was something that would resonate with people. I don't think a lot of people realize that family is family. It doesn't matter who you are; the people you grow up with, that's your family. If you find out your kid is gay, are you going to love him any less? Because if you do, then you're probably not doing parenting for the right reasons.

One of my wife's brothers is gay and I know him and his partner [who live in California] would love to get married but they can't.

Outsports: Do you have close friends who are gay?

Kluwe: None that I know of. Honestly, I've never really asked anyone. I'm more interested in if you're going to play video games with me! Honestly, I don't care. People don't ask me what goes on in my bedroom and I try and give them the same privilege.

Outsports: Do you still think you'd be involved in this issue if you didn't have a relation who was gay?

Kluwe: I would definitely still be signing up for it. One of the things my parents [Ron and Sandy] brought me up with is that you should have equality for everyone. I would like to think I have a pretty strong sense of justice and right and wrong. [The proposed marriage amendment] is just blatant discrimination and that's not right, that's wrong. ...

One of the best things parents can teach their children is to have the courage to go out and find your own answers in life. While we can give you a framework, it's up to you to live your own life.

Outsports: How do see the issue in Minnesota playing out right now?

Kluwe: I see a slight edge right now among people who want to defeat it. Unfortunately, we're going to have to wait to see if the people who want to have it pass resort to the kinds of fear tactics they generally use. "If the gays marry, civilization is going to be ruined! It will be the downfall of everything!" Unfortunately, that seems to work with a lot of people because it hits that gut, instinctual emotional level ... rather than thinking it through and realizing it's a specious argument.

Outsports: How do you see raising your two children in terms of acceptance?

Kluwe: Making sure they know that people are people and it doesn't matter what you look like or what you believe in. Judge people on what they do, not what they say. You can proclaim anything you want, but your actions will show people who you really are.

Outsports: Switching to football, have you ever played with a teammate in high school, college (UCLA) or the pros (Minnesota Vikings) who you knew was gay?

I think people are growing more tolerant, as the younger generation has been raised to believe that being gay isn't a bad thing. As more and more of those guys are getting into the locker room, I think it's definitely becoming more tolerant.

It's going to be really hard for someone to come out until someone does it at the professional level, because that will give that Jackie Robinson-type example that hey, it's OK to do that. I would be completely supportive of a teammate who did that because when it comes down to it, it doesn't matter your sexual orientation, it matters can you help us win on Sunday. That's the only thing that matters in the locker room.

Outsports: Do you think it would be possible on the Vikings for someone under the right circumstances to come out publicly?

Kluwe: Yeah, I think it would. It would have to be someone who's courageous and strong enough to withstand the inevitable abuse and insults that will come their way. It's not going to be easy. But inside the locker room, I would do my part to make it as welcoming an environment as I could and I would definitely speak up if anyone tried to do anything negative there.

Outsports: What is it about the culture of the locker room that makes it not conducive to someone being open about their sexual orientation?

Kluwe: It's a very machismo-type football culture. The past 100 years of football have been about it being a guys-guy sport and you have to shrug everything off and you could never show weakness. For a lot of people, they were raised that being gay is either a weakness or a sin, so it's tough for a lot of guys to get past that kind of cultural conditioning.

But I think views are changing and I think they've changed enough to where I think that while it would be tough to come out, there would be support there.

Outsports: If a Viking came out, he would be the same person but all you guys would know would be one new fact about him, so why would it be an issue?

I've seen it become less rigid in terms of guys being tolerant, but it's still tough because there is that football background to everything.

Outsports: Do you hear gay slurs either in the locker room or on the field, such as fag, faggot or queer?

Kluwe: I used to but I think that's one of the things that's changed due to culture in general the past 15 years. I know growing up as a teenager, that [fag] was one of the swear words you used with your friends because you thought it was a bad word but you never thought about the hurtful implications. But now people know it's not just like bitch or ass that you can throw around ... it's a lot more hurtful.

I definitely hear it a lot less than I did growing up. But that being said, there's still some guys that use it. I haven't anyone use it in a serious manner, it's more they use it because they're used to using it. I'll call someone out if I hear someone saying it. ... Also, it does appeal more to a teenage mindset than an adult mindset.

Outsports: Do players gossip about players they think might be gay?

Kluwe: Nothing serious but you will get some guys that say "He uses a lot of hair products and conditioners, what's he hiding?" But the thing is you don't know.

It's not like people are coming over to my house in the middle of the night to make sure I am sleeping with my wife instead of other guys in the league. Unless someone comes out, it would be really hard for guys to make a definitive statement that another guy is gay. There's no flashing sign above your head saying gay or not gay. How you choose to present yourself, you can present yourself as either straight or gay.

There's probably guys in the league who think that I'm probably gay because of the position I play and the stances I take, but my wife would probably beg to differ. Special teams, we're kind of the bottom of the totem pole. As a special teams player, a lot of people don't really consider you to be a football player even though you're out there helping your team win and practicing like everybody else.

Outsports: How would Vikings fans react to an openly gay player?

Kluwe: I think fans would be OK with it. There's a rich football tradition in Minnesota and while there are some people who would let their prejudice get the better of them, as a whole the state is fairly understanding when it comes to stuff like that. It's a pretty liberal state and I think there would be a lot of support from fans if a player came out and he could play. What the fans want is for the team to win, so it doesn't matter what your sexual orientation is -- can you help the team win?

Outsports: Do you think in the next decade, you will see an openly gay player?

Kluwe: I think we will due to the fact that the subject is coming up more and more not just in politics but in sports.

Kluwe: For me, it's always been about justice and doing what's right. People should treat each other the way they want to be treated and that's basically what life boils down to.

Chris Kluwe has an a popular Twitter feed you can follow. Here is a great profile of him from Yahoo.

For more on the Minnesota marriage amendment, check out Minnesotans For Equality.