Share All sharing options for: French Open loser complains that her opponent Sam Stosur "played like a man" 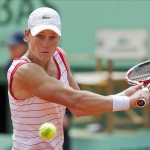 Dominika Cibulkova of Slovakia, was beaten in straight sets 6-4, 6-1 by Sam Stosur of Australia in the quarterfinals of the French Open. She then complained that she lost to Stosur because, as Tennis.com reports:

"Her topspin and her serve, I mean, she played like a man, and it's really hard to play against a man," Cibulkova said. "It was driving me crazy on the court today. So it was really, really hard."

That's an ugly comment to make since we know what it suggests -- Stosur is a lesbian and is not a "real woman" and has some sort of unfair advantage. It is reminiscent of when Martina Hingis and Lindsay Davenport said the same about Amelie Mauresmo, who was openly gay.

Here's a tip for Cibulkova -- stop whining and making excuses when you get your butt kicked by another woman.