Share All sharing options for: Life has been great for high school volleyball player Galen Dodd after coming out 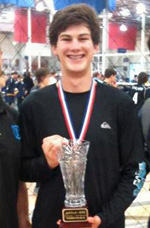 Editor's note: When we published the story of then-15-year-old high school volleyball player Galen Dodd in October, he was the youngest person to come out on Outsports. We asked him to reflect on the impact of his story since.

It's awesome when a teammate has your back. I learned that after I came out publicly and it was no longer a secret that one high school and club volleyball player was gay.

In particular, one of my best friends and teammates, Vinny, was at a party with many players from a rival club team and the players were all ragging on me and thinking it was weird to have a gay guy on the team. Vinny stood up and defended me by saying, "No, there’s nothing different with him than when he was before coming out, he’s actually really chill.” That ended the discussion.

Having such a good friend who is willing to stand up and say “don’t call him a fag, it’s not OK, one of my best friend’s is gay” is such an amazing feeling. I know that he’s going to have my back through anything now.

It’s now been 10 months since coming out publicly -- one of the most liberating moments of my life. It’s been eight months since writing my coming out story for Outsports in October, when I put myself in the public eye for the first time. Both of these moments have greatly impacted my life; it’s built new and closer friendships, a greater team chemistry on and off the court and has made me more confident in my life.

After coming out on Facebook to the world in August, I received amazing support. Over the course of the following three days I received 90 “likes” and 50 comments on my Facebook post: “Galen + PMSing = Oh f*ck it, I’m gay!” and lots of private messages from friends and acquaintances expressing their love and support. 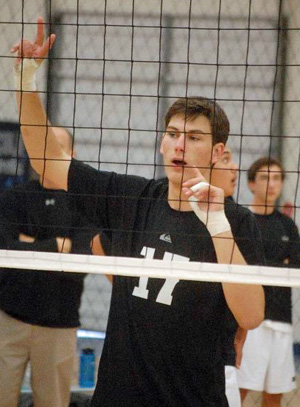 From such support I felt inspired to write an article for Outsports, as I had gotten lots of advice from reading other stories here. I wasn’t too sure about how I wanted to go about writing it. I just sat down one afternoon and before I knew, it was done. Outsports published my narrative on a Sunday night and the responses just poured in like there was no tomorrow. I’ve gotten hundreds of responses from athletes and sports fans alike.

While many of the responses have been from retired athletes or coaches, I’ve gotten quite a number from fellow young athletes.

Through all of this I had not told my high school coach at Pacific Palisades in Los Angeles about my being gay. I spent the fall semester managing the two-time championship-winning Pali girls’ team. They had a match one day and the head coach called me into his office to make some photocopies before the varsity game. Little did I know he wanted to talk about me being gay. At first the conversation was awkward, but by the end it was fine and he has been nothing but supportive on and off the court.

A few days after my story posted, I got an email from a former Pepperdine and USC volleyball player (a straight guy) just expressing his support and how he loved that everyone has been nothing but supportive in my coming out process. It turned out he actually played for the same club I do, had many of the same coaches and even played with one of my coaches in college at Pepperdine. It was awesome seeing that such a “manly” straight guy was so supportive without even knowing me.

I wasn’t sure if any of my club coaches at the Southern California Volleyball Club knew that I was out prior to the article and it turns out they didn’t. The second practice of that week I walked into the gym and immediately the boy’s director for SCVC (also the assistant men’s coach at USC) came up to me and gave me a big hug, expressing his support and happiness that I was a member of the SCVC family; this meant a lot to me. As I was walking out of the gym after practice, the head coach of USC and SCVC, Bill Ferguson, also expressed his support and acceptance of me. Playing under these coaches and for SCVC has been nothing but amazing.

A few months after posting my story I got a Facebook friend request from a guy at Pali. Thinking nothing of it, I accepted. A few days later, I get a long message from him sharing with me that he was unsure about his sexuality and would like to try and get some more insight into it. By now I had talked to quite a number of teen athletes and I was more than happy to help. We talked for a bit and, in the end, he knew he was gay but just unsure how to admit it. I love that people feel so confident in me that they’re willing to share some of the most personal things and ask for help.

I’ve also gotten messages from people asking if I was interested and willing to do publicity. I did an interview with Dan Woog about coming out for an article and got nothing but more support in response. I also have been interviewed for the Last Closet, a web campaign about homophobia and gays in pro sports, hoping to interview top-notch athletes and sport league commissioners about their tolerance of non-heterosexual players. And most recently, I have been named to the “40 under 40’’ list in the Advocate. From coming out and writing my article I never expected to get my “15 minutes of fame,’’ and I’d be lying to say I don’t like it, but it’s shown me that I want to be on the forefront of combating discrimination of LGBTQ athletes at every level of sports and that I want to help LGBTQ young people.

While coming out seemed like such a big burden in my life, it’s actually turned out to be an awesome experience. I’d like to think that hitting the “share” button on FaceBook late that August night has been one of the most impacting and important moments thus far. Anyone who is reading this who is unsure about their sexuality or coming out, please know, I am here for you, you’re welcome to contact me at any time. And remember, sometimes the safest thing to do is not come out; everyone’s coming out is different and shouldn’t be rushed into.

Galen Dodd, 16, just ended his sophomore year at Palisades Charter High School in Los Angeles. He plays club volleyball for the Southern California Volleyball Club; they're heading to Dallas to compete in the Junior Nationals in July. He is also a spokesman for the Last Closet campaign. He welcomes emails at galen.dodd@gmail.com or on Facebook at Galen Dodd.

Related: Galen Dodd's dad on what his son's coming out meant to he and his family.