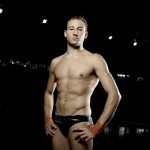 Australian Olympic shooters Russell and Lauryn Mark are making asses of themselves after whining that they won't be able to stay together in the Olympic village. He says it's anti-heterosexual discrimination.

"The stupid part of this, which I have argued to them, is that there are tons of gay couples on the Olympic team who will be rooming together so we are being discriminated against because we are heterosexual," Russell Mark said. "Every couple, whether they are married or de facto should have the AOC trying to bend over backwards to accommodate their needs."

Lauryn agreed with her husband on how good the gays have it.

"I am very frustrated because in sport there are a lot of same sex couples and its OK to be partners with someone of the same sex but if you are heterosexual you are penalized."

The Marks must know something about the makeup of the Australian Olympics team that no one else does. Diver Matthew Mitcham is the only openly gay Aussie Olympian. Mitcham's partner, Lachlan, is not an athlete, so he is not allowed to stay in the village. Mitcham had fun with the Marks on his Twitter feed:

Australian Olympic officials said that if the Marks want to stay together, they could get a room outside the village and pay for it. Other Australian athletes who have opposite-sex partners on the team are fine with the rule separating the sexes at the village. Australian Swimmers Association boss Daniel Kowalski said that two swimming couples have no problem being separated.

"My understanding is that they will room with the same sex. I haven't seen any requests come in (to the contrary). I guess that's what they need for their best performance."

Rob Mitchell, a member of the Victorian state government's Sport Governance and Inclusion project, ripped Mark for his comments:

"If his stance is not anti-gay, who choose sexual orientation as a defining characteristic?' said Mitchell, instrumental in pushing the AFL player union's anti-homophobia stance. "Olympic athletes seem to think they are imbued with some sort of reverence. Being Olympic shooters they might be able to shoot straight, but can they think straight? It is a bizarre reference from Russell Mark."

The Marks are being ridiculed for their stance and comments in Australia and the more scorn the better.