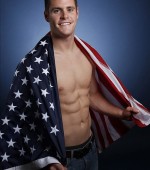 With the Fourth of July here and the Olympics less than a month away, it's time to feel patriotic if you're an American. In that spirit, US PRESSWIRE took some awesome photos of Olympic hopefuls showing their colors.

These photos were shot in May, so not everyone below qualified for the team. But no matter -- whether in front of a flag or wearing a red, white and blue swimsuit, we salute them.