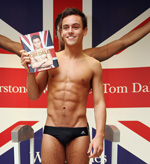 Tom Daley, 18, is the most popular Olympian in Britain and a medal favorite in the men's 10-meter platform diving event at the London Games. He graces the cover of magazines shirtless, makes playful music videos and commercials (see below), has 254,000 Twitter followers and has girls screaming every place he appears. He was also mercilessly bullied as a younger teen, so bad that he had to change schools.

Daley did a big spread for the British magazine Fabulous, dressed in a torn wet, open shirt that exposed his tight diver's body. He talks about the good (having female groupies), the bad (the death of his beloved father from cancer two years ago) and the ugly (the bullying at his former school). Said Daley about the bullying:

“It started off gradually and got worse. It got to the point where if they’re taking my legs out in a rugby tackle… well, that’s not very funny.

“It does knock your confidence, and that’s why it’s so important to have someone to talk to. For me that was my parents. I know lots of kids go through it and I hope they have someone to speak to. Don’t be afraid to tell someone.”

Amazingly, he was bullied in 2008, months after competing in the Beijing Olympics. Being a star athlete did not make him immune to the taunts, with one bully saying to him: “How much are those legs worth? We’re going to break your legs.”

In a scenario that plays out a depressing way too many times, Daley says school administrators did nothing to stop the bullying. Things only got better when his parents moved him to another school.

"One of the things my dad taught me was not to worry about what anyone thinks. And as long as I’ve got my friends and family right behind me, then that’s all I need.

“The friends who helped me are still my best friends today. It helped me realize who my true friends were. It made me stronger. I look back and think: ‘I came through that,’ and I think I’m a better person.”

Given the fame and attention he is receiving, Daley must feel like the bullying happened eons ago, but I doubt he will ever truly forget; Daley is one who can understand what gay teenagers go through with this. He is getting the last laugh and those bullies must be green with envy when they see him rising above their taunts and thriving. Daley has a ton of pressure diving in his home country, but he will be among athletes I will be rooting for big time.

Daley is sexy and he knows it: 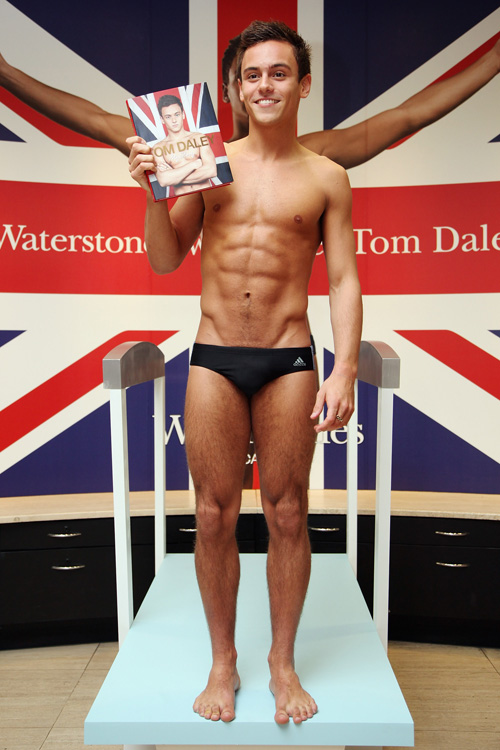 Photo: Tom Daley poses for the media during the launch of his new autobiography, "My Story," on his 18th birthday at Waterstones book store on May 21, 2012, in London. (Photo by Dan Kitwood/Getty Images)