Share All sharing options for: 10 Greek Gods from the 2012 London Olympics 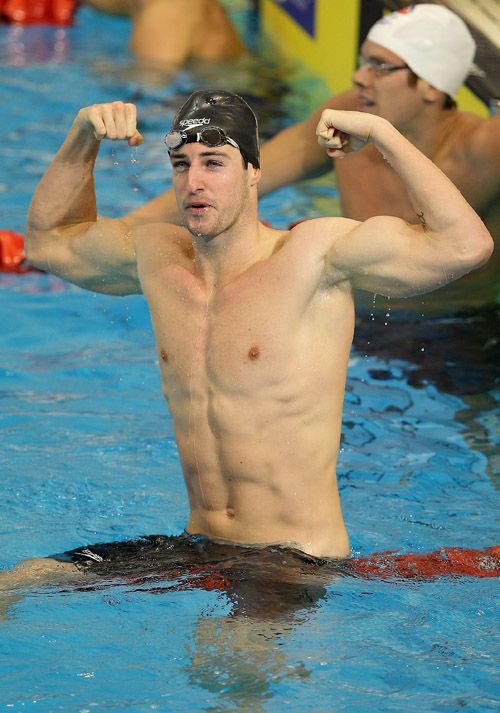 Like most, I watched the Summer Olympics on TV from the comfort of my couch. Here in Canada, CTV was the official broadcaster for the Olympics, and based on the many tweets I saw on Twitter complaining about NBC’s coverage below the 49th parallel, I’m pretty sure I had the better seats.

I've been watching the Olympics since I was a kid. My earliest memory of watching the Olympics was the 1976 Winter Olympics when Dorothy Hamill won the hearts of everyone in America, and then won a gold medal in figure skating. Ever since then, I always wanted to learn how to do a Hamill Camel! But, alas, I can barely go forward on a pair of ice skates.

But it was the Summer Olympics that eventually captured my imagination. It had nothing to do with the Speedos and skimpy running shorts that displayed the athlete’s muscular, Olympian physiques. Okay, yes it did. But, the original ancient Greek Olympians competed nude because in addition to athletic ability it was also a celebration of the male human body.

I've spent the past 15 days studying the panoply of protruding pectorals and rippling abs that made me thankful for the technology we have today that allows one to rewind and replay live television over and over and over again. So, here’s my Top 10 list of some of the best Greek God-like athletes I saw from my couch here in Vancouver.

10. Marcelo Chierighini, Swimming (Brazil)
Brazilian men are notoriously beautiful, and when cast your eyes on Chierighini, you’ll see why. He has the dreamiest eyes that you could gaze into all day long, and below the neck is just as lovely. He didn’t make it very far in the London Olympics, but, hopefully we’ll get to see even more of him in the 2016 Olympics in Rio De Janeiro.

9. David Belyavskiy, Gymnastics (Russia)
If Belyavskiy could sing as well as he handles the uneven bars and pommel horse, he would probably be more famous than Justin Bieber with the Tiger Beat crowd. He has boy-band good looks and adorns his left ear with a diamond stud. He’s definitely a cutie-pie and is already well groomed and good to go!

8. Riley McCormick, Diving (Canada)
McCormick is such a cutie with short, wavy hair and a bit of scruffiness on his baby face. He caught my attention during the Men’s 10m Platform Diving because he looked just as good soaking wet as he did dry, with a Speedo so tiny you could see his butt cleavage. Unfortunately, he finished 11th. But in my book, he’s in the Top 10.

7. Ivan Garcia Navarro, Diving (Mexico)
Navarro is only 19 years old, and while he does have a lean, defined physique, he also has a beautiful face with great bone structure. He’s like a cute little puppy who just needs a bit of grooming to fix that unibrow. Although the shadow of growth on his face during the diving competition should definitely stay, it defines his cheekbones and makes him look even sexier.

6. Ellis Coleman, Wrestling (United States)
Coleman competed in Greco-Roman wrestling, which I think should be done nude to be considered Greco-Roman. But, he does fill out that wrestling singlet quite nicely. Equally nice is his beautiful face that lights up when he smiles and shows off those ridiculously cute dimples. I certainly wouldn’t mind being put in a head-lock between his thighs.

5. Julian Reus, Athletics (Germany)
With his perfectly-coiffed, blonde-tinted hair and muscular physique, Julian is a stunner of a runner, and looks like he walked off the pages of an Abercrombie & Fitch catalog. I spotted him during the Men’s 4x100 Relay and when I posted a photo of him on Twitter, I got a bunch of “WOW” replies back. Wow is right, he is gorgeous.

4. James Magnussen, Swimming (Australia)
James Magnussen defines Hunk. He’s masculine, sexy, and looks absolutely amazing in a Speedo. This is exactly who I imagine when I think of “Australian Lifeguard.” His nickname is “Missle,” apparently because he is the current 100-meter freestyle world champion. But I’d like to think that nickname means something else.

3. Danell Leyva, Gymnastics (United States)
Danell is a total stud who likes showing off. He defected from Cuba to the United States when he was one year old, and recently appeared nude in ESPN The Magazine’s Body Issue. But before ESPN The Magazine, he appeared in a series of racy photos he sent to a former girlfriend, who kindly sent them all to a sports/gossip blog. Danell is welcome to send as many nude photos he wants to me, and I promise I will never send them to anyone else.

2. Niccolo Gitto, Water Polo (Italy)
It’s a shame that Gitto spends most of his time submerged up to his neck in water obscuring his muscular, tanned body. But what’s poking above the water is just as delightful. He has a strong, square jaw with sensual lips that you just know would be great for kissing. I know because I spent quite a bit of time imagining what it would be like. If Michelangelo were alive today, he would have immortalized Gitto in marble like the famous statue of David. Sans Speedo. Ciao Bello!

1. Tom Daley, Diving (Great Britain)
Tom Daley was the standout simply because of the way he sashayed out of the pool over to the shower and then into the hot tub, usually filled with other beautiful divers that made it look like a scene from a Bel Ami movie. Tom is an athlete aware of his physical beauty and he is thankfully very generous in showing it off by wearing some of the tiniest Speedos I have ever seen! He’s truly a minx who gave my rewind button a good workout. Bravo, Tom!

Tom is a sassy gay Canucks fan who, when not swimming in his Fantasy Hockey Pool with Chris Higgins, Tyler Seguin and Gabe Landeskog, is writing about the Canucks for PuckBuddys.com, a gay hockey blog for boys who like boys who like hockey, and is also making general mischief on Twitter as @GayCanuck.

April 28, 2011; Montreal ,QC, CAN; Riley McCormick (CAN) during one of his dives at the FINA Diving Grand Prix Men's 10M Semi-Final at Olympic Stadium. Mandatory Credit: Jean-Yves Ahern-US PRESSWIRE

LONDON, ENGLAND - AUGUST 10: Matteo Aicardi #11 of Italy and team mate Niccolo' Gitto #3 look on from the bench in the Men's Water Polo Semifinal match between Italy and Serbia on Day 14 of the London 2012 Olympic Games at the Water Polo Arena on August 10, 2012 in London, England. (Photo by Adam Pretty/Getty Images)