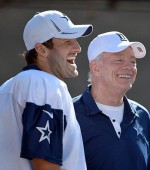 I was so focused on the the Olympics, that I didn't realize the NFL has suddenly turned gay. This comes courtesy of rather bizarre comments by former Washington Redskins coach Joe Gibbs and Jerry Jones, the Dallas Cowboys owner. Jones longs for the days of lots of oral sex on the Cowboys (video below).

First Gibbs. The ex-coach was on ESPN Radio and ESPN News and came on following former NBA player Charles Oakley. Deadspin has the transcript:

Russillo: He looks like he could actually make the transition to tight end.

Gibbs: I think he could. I go to the pro basketball game every time and they always said I was queer for tight ends. I had more tight ends running out there with the Redskins, and I look out there and that's where the tight ends are, they're playing in the NBA.

Hmmm. I am not sure what to make of this coming from the ultra-religious Gibbs. I am not sure if I should be offended by the choice of words or amused; I am leaning to the latter.

As for Jones, what he said at a recent news conference about longing for the days when the Cowboys won Super Bowl was hilarious:

Someone better whip up a T-shirt with Jones' saying. Count me in for one. Here is Jerry talking his fantasy: