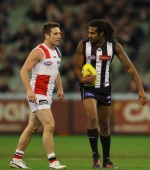 Stephen Milne of St. Kilda in Australian Rules Football was fined $3,000 for calling Harry O'Brien of Collingwood a "f***ing homo" during a match last week.

"It has been confirmed that Milne made an inappropriate homophobic comment towards O'Brien during the course of play in last weekend's round 19 match at the MCG which has breached the AFL players' code of conduct and the AFL's policy on discrimination and vilification," the Saints said in a statement on Thursday night.

"As a consequence of this breach, Milne will be sanctioned $3,000 by the St Kilda FC and be required to undertake an AFL education program to address the inappropriate nature of his comments."

Milne and O'Brien got into it during a match and this was when Milne unloaded the gay slur at O'Brien. The Collingwood player said he wasn't offended "because I'm a very heterosexual guy,” though he added:

“I’m not perfect, I put my hand up and say I’ve used words like that, not on the football field, but in general,” O’Brien told Melbourne’s Fox FM. But the defender said Milne deserved his punishment.

“We need to be more sensitive. If you think we are being too politically correct then ask a homosexual person what they think about it,” he said.

Milne's coach Nathan Buckley had a bizarre defense of his player, saying that since O'Brien wasn't bothered by the slur "it's not vilification unless the person receiving the comments is concerned by it." The coach did add that he was "concerned by the slur itself." Nice doublespeak.

Hat tip to Matt for the item.