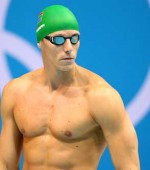 Day 7 saw the next-to-last day of swimming finals, with Ryan Lochte losing both his races to fellow Americans Tyler Clary and Michael Phelps.

We also have one of the most homoerotic shots of the Games, courtesy of a winning South African rowing team, plus more from the rowing venue.

Bruno Fratus of Brazil leaves the pool after competing in the Men's 50m Freestyle semifinal. (Photo by Al Bello/Getty Images)

Roland Schoeman of South Africa looks on prior to competing in the Men's 50m Freestyle semifinal. (Photo by Ezra Shaw/Getty Images)

The USA water polo team jumps in the water before the start of the match. USA defeated Great Britain 13-7. (Photo by: Bob Donnan-USA Today Sports)

John Isner (USA) during a break in the match against Roger Federer (SUI) in the men's singles quarterfinals. (Photo by: Matt Kryger-USA Today Sports)