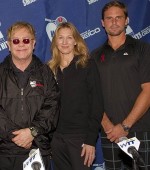 Jan-Michael Gambill has been a topic of conversation for years among Outsports readers, with some wondering if he is gay and others liking his propensity for being seen shirtless. I had totally forgotten he was still around, but he's only 35 and plays for the Boston Lobsters of World Team Tennis.

He's also buds with Sir Elton John and his partner David Furnish and the London Daily Mail reports that the tennis pro was on the singer's yacht in the south of France. Gambill has know Sir Elton a long time and had been in charity tennis events to raise money for the Elton John AIDS Foundation, the paper said.

Thanks to a reader for the tip.