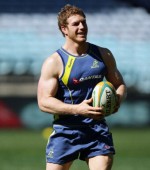 One of the most eloquent and charismatic straight athlete allies for gay rights is David Pocock, an Australian rugby player. He and his partner, Emma, won't marry until gays and lesbians have the same rights in Australia. He is up front and proud of his support for same-sex marriage, a hot topic being debated in parliament Down Under.

Pocock was on the Australian Broadcasting Company TV show "Q&A" (video below) to discuss gays in sports and gay rights in general and he totally outshined John Alexander, a former tennis great and now member of parliament for the Liberal Party, which opposes same-sex marriage. Alexander said that his party would not be changing its views, which drew this retort from Pocock:

The biggest thing in this debate is that we're dealing with people here. And how can you blame someone for what they are? People don't choose their sexuality and we marginalize the LGBTI community for what they are. I think that this is a conversation that needs to be had and that needs to be discussed compassionately and actually come to something that's reasonable. And in my mind, that's marriage for everyone. We've moved forward on so many issues and this is the next progression.

Alexander was obviously uncomfortable discussing the subject and at one point said: "I was just trying to squirm around and get out of it," when asked how his views squared with that of his party's. He then offered this weird parsing of the issue based on a conversation he had recently:

"As we talked we had this flippant conversation, maybe we should institute a gay marriage for women and call it a Navratilova and as the conversation went on possibly an Alexander for gay men, not after me but for Alexander the Great."

Pocock was ready with this nice response:

A lot of gay people may not believe in the institution of marriage, but I believe it needs to be an option. How can we be challenging homophobia when we're saying. 'You're equal to me but you're separate. I'll go sign this [marriage] document here but you can go have your civil union,' which is the same, but not really.

The video (about nine minutes long) is worth watching, if only to see how dynamite Pocock is as a speaker and advocate:

Photo: David Pocock of the Wallabies runs with the ball during the Australian Wallabies captain's run on Aug. 17, 2012 in Sydney, Australia. (Photo by Matt King/Getty Images)

Hat tip to Andrew Glenn for the item. Andrew wrote a coming out story for us when he was a collegiate rower and now lives in Sydney, Australia.