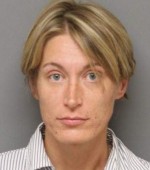 Charlie Rogers, a former player on the University of Nebraska women's basketball team, crawled naked from her Lincoln home on July 22, bleeding from what she said were gay slurs carved into her body. Police now say she faked the whole thing and have charged her with making a false police report.

Forensic medical professionals told police the anti-homosexual epithets cut into the body of a gay Lincoln woman were most likely self-inflicted, part of what has now led authorities to seek her arrest for false reporting. ...

Her story that three masked male intruders broke into her house, bound her with zip ties and cut epithets into her arms and stomach fell apart under closer scrutiny, according to an arrest warrant affidavit filed by Lincoln Police Investigator Lynette Russell.

Five days before the attack, Rogers, 33, bought "zip ties, a box cutter, box cutter blades and white gloves from a local hardware store." The nature of the cuts and the fact that they avoided sensitive body parts led police to believe she made everything up.

Rogers is a lesbian and police say she staged the fake attack to draw attention to gay issues. Lincoln has had a contentious debate over an ordinance banning discrimination based on sexual orientation; the city council passed the ordinance, but citizens have petitioned to put the issue on the ballot. Police cited a post Rogers made on Facebook four days before the incident:

"So maybe I am too idealistic, but I believe way deep side me that we can make things better for everyone. I will be a catalyst. I will do what it takes. I will. Watch me."

Rogers pleaded not guilty to the charge and her attorney Brett McArthur said she continues to insists the attack happened:

"This has been a very traumatic event for her, and having the focus of the investigation turn toward her has been really hard."

Gay rights supporters had held rallies to support Rogers, but on Tuesday the credited police for conducting what they called a fair and thorough investigation.