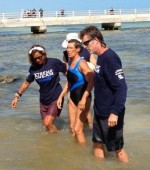 Nyad being helped from water after her recent attempt.

Diana Nyad tried for the fourth time to swim from Cuba to Florida, the attempt this week as she turned 63. With the help of her extensive support staff, Nyad was able to navigate sharks, hypothermia and fatigue, but it was jellyfish that eventually forced her to stop. She had worked extensively with jellyfish experts on the best ways to combat the creatures, but in the end it didn't matter. As she wrote on the Huffington Post:

The Box Jellies came out the first night. Nine stings. Just about every square inch of my body was covered with protective materials (even gloves and booties, which slow me down), but Bonnie and Angel quickly innovated even further. Bonnie cut lengths of duct tape for my ankles and wrists and another swatch to cover my nostrils. Angel prepared hot salves and tried to coat the stung areas to at least lessen the dire effects.

And yet my lips, the only exposed area left, were repeatedly hit by the small wisps of these tentacles, no wider than a strand of human hair. The pain was searing. Then came the systemic effects. Chills all over. Tremors. Angel's treatments kept the very worst, pulmonary distress, from happening. Bonnie's duct tape coverage and my FINIS suit also reduced the effects. Nevertheless, I am going to admit to you right here and now that these animals are too much for me.

Nyad admits that with the jellyfish proliferating in the Gulf of Mexico, they may prevent her from attempting the swim again (as she writes, she can't swim the breaststoke with a bee bonnet on). But she is looking at her endeavors from a philosophical point of view:

Many people who write me, friends and strangers alike, use the phrase "watching how you live your life has inspired me." I myself need to remember this. There is no doubt that I would have been jubilant to touch that Florida shore, to have made history, to at long last lived out the vision I've had in my brain for so very long. Yet I've been living a grand life, driven by this very quest.

The age-old discussion of journey-versus-destination is most apt here. As my great writer friend Jane Anderson says it best: The journey is the destination.

Here is a video for the YouTube channel WIGS where Nyad takes about why she does what she does (her description of how a jellyfish sting feels like being boiled in oil made me shiver):