Share All sharing options for: San Francisco 49ers first NFL team to do anti-bullying It Gets Better video 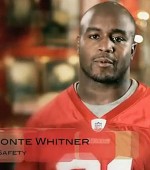 The San Francisco 49ers are the first NFL team to produce a video for the It Gets Better Project, which fights bullying of lesbian, gay, bisexual and transgender teens. Delivering the message on behalf of the team are four members of the Niners defense: Ricky Jean Francois, Isaac Sopoaga, Donte Whitner and Ahmad Brooks.

The video is a montage of the four making this pitch:

There's nothing easy about being young. About being yourself. About being an individual. Every day brings different changes and challenges that define who you are.
But something you should never experiences is being bullied, intimidated or being pressured into being someone or something you are not. The San Francisco 49ers are proud to join It Gets Better.org to let all LGBT teens know that It Gets Better.

Believe in yourself, set goals for yourself. Look to the future and it will get better.

Scott Zumwalt of the It Gets Better Project gave Outsports this background:

Many [49ers] wanted to be in it, but they picked the most intimidating guys to deliver the message. ... Videos like these will hopefully help continue to ward off homophobia in sports and provide hope to young fans that they, too, can be themselves. If they existed when I was young, I would have come out much earlier.

Many Major League Baseball teams have done similar videos, but this is the first for an NFL team (one Seattle Seahawk participated in a Seattle sports one a year ago). Sean Chapin, a 49ers fan, got 16,000 people to sign an online petition last October requesting the Niners produce a video.

The first wave of comments on the 49ers YouTube site about the video are generally positive, but there are exceptions: "I love my Niners, but seriously,ugh.﻿" This was followed by: "What 4 jackasses disliked it?? Must be non 9ers fans﻿ or ignorant ppl."