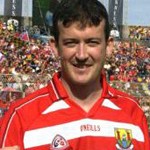 When Donal Óg Cusack came out in 2009 as an openly gay athlete in the Irish sport of hurling, it was huge news. He was the most prominent gay Irish athlete ever and his coming out was a milestone for the culture. Last week, he delivered the keynote speech at a pride event in Foyle, County Derry, that is brilliant, funny and moving.

The Irish Times has reprinted the whole thing, but here is a taste that hopefully will get you to read the whole thing. He evokes a sense of place, team and community that is rare and I can see why he is so popular in Ireland.