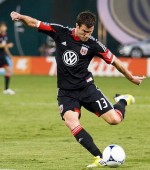 DC United is the first team to produce a video for the You Can Play Project, in a spot featuring Head Coach Ben Olsen, midfielder-forward Chris Pontius, and defender Mike Chabala. United is the first Major League Soccer team to do a video, though United did an It Gets Better video a year ago and Chabala was photographed for the NoH8 campaign.

"We are united in support of all our coaches, teammates and fans, gay or straight," Olsen says in the You Can Play video.

The video is timed to coincide with the team hosting United Night OUT for the LGBT community, Sept. 15, in a game against the New England Revolution. The Washington Blade has all the details on the event.