Share All sharing options for: Derek Jeter of the New York Yankees did not have a sex-change operation 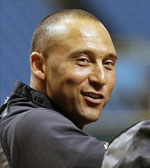 New York Yankees fans had a shock when they saw a status update on the team's Facebook page Thursday that read:

We regret to inform our fans that Derek Jeter will miss the rest of the season with sexual-reassignment surgery. He promises to come back stronger than ever in 2013 as Minnie Mantlez.

The Yankee were victims of a hacker, who also broke into the Facebook pages of other teams to post these gems:

Deadspin has the complete list and some are rather clever. Facebook blamed it on one guy, according to the New York Daily News:

"Recently, several Pages made unauthorized posts as a result of actions from a single rogue administrator of these Pages. Our team responded quickly and worked with our partners to eliminate the spam caused by this attack. This was an unique, isolated incident and we are always working to improve our systems to better protect our users and their data."

Team Facebook sites are run by an arm of MLB.com, not the teams themselves. As far as we know, Derek is still Derek not Darlene.