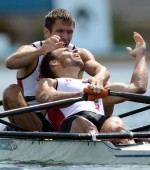 Day 9 saw the last day of swimming finals, with the U.S. men and Michael Phelps going out in style in the 4x100 medley relay.

On the track, history was set in the men's 10,000 meters when Britain's Mo Farah and American Galen Rupp finished 1-2. It was the first time Britain won the 10,000 gold and only the third time -- and first since 1964 -- that an American won a medal. In rowing, we have what is often our homoerotic shot of the day, courtesy of the winning Danish pairs.

William Lockwood, James Chapman, Drew Ginn and Joshua Dunkley-Smith of Australia celebrate with their silver medals during the medal ceremony for the Men's Four Final. (Photo by Harry How/Getty Images)