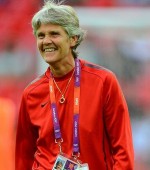 Pia Sundhage, who coached the U.S. women's soccer team to the Olympic gold medal in London, announced she was stepping down to return to her native Sweden. Sundhage was among the more than two dozen openly gay and lesbian athletes and coaches at the 2012 Olympics.

"I want to thank all the players and all of my assistant coaches for making me better," Sundhage said in a statement. "Before I took this job, I always admired the spirit and character of the U.S. team, but to experience that first-hand on the training field and from the bench as their coach was truly special and something I will treasure for the rest of my life."

The U.S. team is 88-6-10 since Sundhage took over as coach in 2007; the team won the Olympic gold in 2008 and 2012. She is expected to stay on for the team's next two games on its post-Olympics victory tour. The coaching job for the women's team in Sweden is open, and she is considered a strong candidate. "I have to admit, I've been away from my home for five years," she said.

MLS Soccer has a nice roundup of reactions from her players, both former and current. U.S. goalie Hope Solo tweeted: "Pia has allowed us 2 be individuals,while showing us what aTEAMreally is.She led us to 2 Golds,1 silver AND we played beautiful football!#fb"

Sundhage, in an interview with Swedish TV in 2010, said, “There has been no problem for me to be openly gay as head coach in the U.S.” At the time, she also had a girlfriend named Marie. The U.S. Olympic team had one openly lesbian player, Megan Rapinoe.