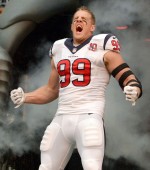 The Postgame blog over at Yahoo is getting a lot of buzz for its look at the new NFL uniforms designed by Nike, that promise the latest in fabric technology.

The attention comes from a screen-grab of the very sweaty and revealing backside of Detroit Lions offensive lineman Jeff Backus, adding that "advances in technology come with unintended consequences or unfortunate byproducts." On many players, you can tell if they wear a jock or not.

The new look is most noticeable in players wearing white pants, as these photos below show. None leave as little to the imagination as the Houston Texans.

Photo credits:
Brian Urlacher #54 of the Chicago Bears looks at Andrew Luck #12 of the Indianapolis Colts before the snap during their 2012 NFL season opener at Soldier Field. (Photo by Jonathan Daniel/Getty Images)

Houston Texans linebacker Brian Cushing (56) reacts before the game against the Miami Dolphins at Reliant Stadium. (Photo by: Kirby Lee/Image of Sport-US PRESSWIRE)

Tim Tebow #15 of the New York Jets warms up before the start of their game against the Buffalo Bills at MetLife Stadium. (Photo by: Rich Schultz /Getty Images)

Indianapolis Colts linebacker Jerrell Freeman (50) celebrates his interception for a touchdown during the first quarter against the Chicago Bears at Soldier Field. (Photo by: Dennis Wierzbicki-US PRESSWIRE)