Share All sharing options for: English rowing team gets naked to raise money in a fabulously cheeky video 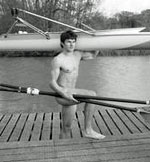 Hats off to the Warwick University rowing club in Coventry, England, for taking it off as part of a fund-raising effort for new uniforms. They produced an awesome and (mostly) PG video with great production values (see below). They are further enticing supporters with the promise of a photo shoot at a meet and greet:

The photo shoot itself will be the highlight of the event. Several rowers will be stripping off completely, and you will have the opportunity to see at first hand exactly how much work we and our photographer put into creating shots that are both naked and family-friendly!

Because we are going to be fully naked during the shoot, we have to ask guests to leave their cameras and phones with us for this part of the event. But you will have a record of hanging out with the @naked_rowers! Our lovely photographer will be happy to take your picture with us, using his customary ingenuity to keep things PG-rated, and you will receive downloads of these as part of the reward.

The club has set up a page at the British site Crowdfunder and raised $3,600, more than their $3,200 goal. Some of the proceeds have been promised to Ben Cohen's StandUp Foundation, which fights teen bullying. So, it's good fun for a good cause and whoever writes their pitches has a great sense of humor:

Our support has been growing both in the UK and around the world, so this year we want to make our calendar and film bigger and better than ever. And hotter. Did we mention hotter? But even with the zero budget for wardrobe and a whole lot of favours from everyone involved, it costs money to create something really great. So we need your help.

I imagine that if this was attempted by a U.S. team, it would have been shot down from the start. The British have a more relaxed view of seeing a naked bum, and there is no frontal nudity. This video does show bare butts, so don't watch if that offends you: